If you're playing only to win, go with my top pick Belichick (7/2)

Check out our predictions and odds for the 2020 Breeders’ Stakes at Woodbine!

Mighty Heart will look to make history and join a famed honor roll of horses to sweep all three legs of the Canadian Triple Crown when he faces 11 other 3-year-olds in Saturday’s $400,000 Breeders’ Stakes at Woodbine Racetrack.

Hero of both the Queen’s Plate and Prince of Wales, the one-eyed Mighty Heart will look for a clean sweep as the horse racing series turns to the final and longest leg in the 1 ½-mile Breeders’ Stakes. The son of Dramedy will also need to prove that he can get it done on the turf on Saturday after winning the first two legs on Tapeta and dirt. Trained by Josie Carroll, he has been made the even-money morning-line favorite.

Chief among his rivals will be the two horses who have given him the most competitive in the first two legs of Canada’s Triple Crown. Clayton, the second betting choice in each of the first two legs, followed up a third-place finish in the Queen’s Plate with an improved run to finish second behind Mighty Heart in the Prince of Wales.

Belichick, meanwhile, was second as a longshot in the Queen’s Plate. The lightly raced colt then skipped the Prince of Wales to wait to run in Saturday’s Breeders’ Stakes, a race he is bred to appreciate.

How to Watch the Breeders’ Stakes

He is certainly the one to beat off two strong performances which put him on the brink of accomplishing something special. Not only has he developed into a very nice horse, but he also looks like one that is really appreciating the added distance of the classics. He’s beaten several in this field including the next two choices, so it looks like the switch to grass is the big question. His only previous race on turf was not good, although he lost all chance on the first turn, and he is a different horse now. The obvious favorite should be tough, but the second choice might be the one who really wants 12 furlongs on the turf.

Trainer Jose Carroll has an awfully strong 1-2 punch with both the favorite and this one. The son of Lemon Drop Kid was never going to catch the winner in the Queen’s Plate, but his rally for second after some trouble was an awfully good performance considering it was only his third-lifetime start. Resting while skipping the second leg, he now gets turf and even more distance in the 1 ½-mile race. According to his pedigree, this should be right up his alley. Mighty Heart has gotten very good, but this one seems to be tailor-made for this race. I believe he will reverse the result of the Queen’s Plate and end the Triple Crown quest of his stablemate. He is the top choice.

Certainly one of the more talented Canadian-bred 3-year-olds out there, he ran solid races to finish third and second in the first two legs. Having said, he was really no match for the winner. It also looks like Mighty Heart is enjoying the extended distance more than he is. Saturday will mark his first try on the turf, and only a real fondness for the new surface would give a strong chance for him to turn the tables. As one of the favorites, I will take a stand against it.

He had his three-race winning streak snapped last time when he finished out of the money against open company in the Toronto Cup. All things considered, though, it was not a bad effort in his first try against strong competition. He clearly likes turf, having earned his first two wins over the Woodbine turf course. He also has enough early speed to be involved from the outset. I am not certain that the distance will be appreciated, but he is a danger if he can relax early and have something left for the lane.

Bred for both turf and a distance, this son of English Channel is thrown into a tough spot after his first four races all came against maidens. The good news is that he has shown steady improvement culminating with a solid maiden breaking performance last time. This will be a big test, but the 12-furlong distance should be a good thing for this horse who looks like he wants to run all day. Look for him to make the jump up in class with a solid performance on Saturday.

After a pair of promising races back to back, he showed little when moved up to stakes caliber racing in the Queen’s Plate. Following his 11th place finish in that big one, he returned to allowance company to run a decent race, rallying for fourth. He should like the 12 furlongs on Saturday, but I’m not sure there is enough in his past performances or his breeding to suggest he can run a big one on the grass.

He has finished out of the money in his last two starts, including a well-beaten fifth last time in the Prince of Wales. Three races back, though, was a very nice effort, and that was also his most recent race on grass. That afternoon, he circled wide and got up for a solid allowance win. Perhaps a return to the lawn will give this son of Curlin the boost he needs to contend against stakes horses.

The son of Daredevil is a two-time stakes winner on the grass. That’s something no other horse in the field can say. Unfortunately, those came at smaller tracks last year. In his four subsequent starts, he has not been close to the winner. Plus he has never before run longer than 8 ½ furlongs. I will pass on this Casse runner.

In his last race, he finished well back in the Queen’s Plate as a 94/1 longshot. Now he comes back for this on a surface where he found no success in his first two tries. He is not one that I can recommend in the final leg of Canada’s Triple Crown.

He’s been knocking on the door of late with two solid efforts on the grass in optional claiming events locally. It looks like the son of Singing Saint has taken to the grass, now the question becomes whether he can handle the distance and the class. He is not without hope.

Still, a maiden after eight-lifetime starts, this gray son of Magician deserves to be a big price on Saturday. There is reason to consider him, however. Two starts back, he made a strong rally on the Woodbine turf to finish a good second to Muskoka Giant. Off that, he came to run 6th in the Prince of Wales. Back on turf, and stretching out to a distance which he’s bred for, he may just be ready to surprise with a big effort in the Breeders’ Stakes.

The speedy son of Temple City will be making a big step up in class after tangling with claiming company in his last four starts, all in South Florida. He does like turf and could be out there early, but eventually, both the class and the distance should catch up with him. 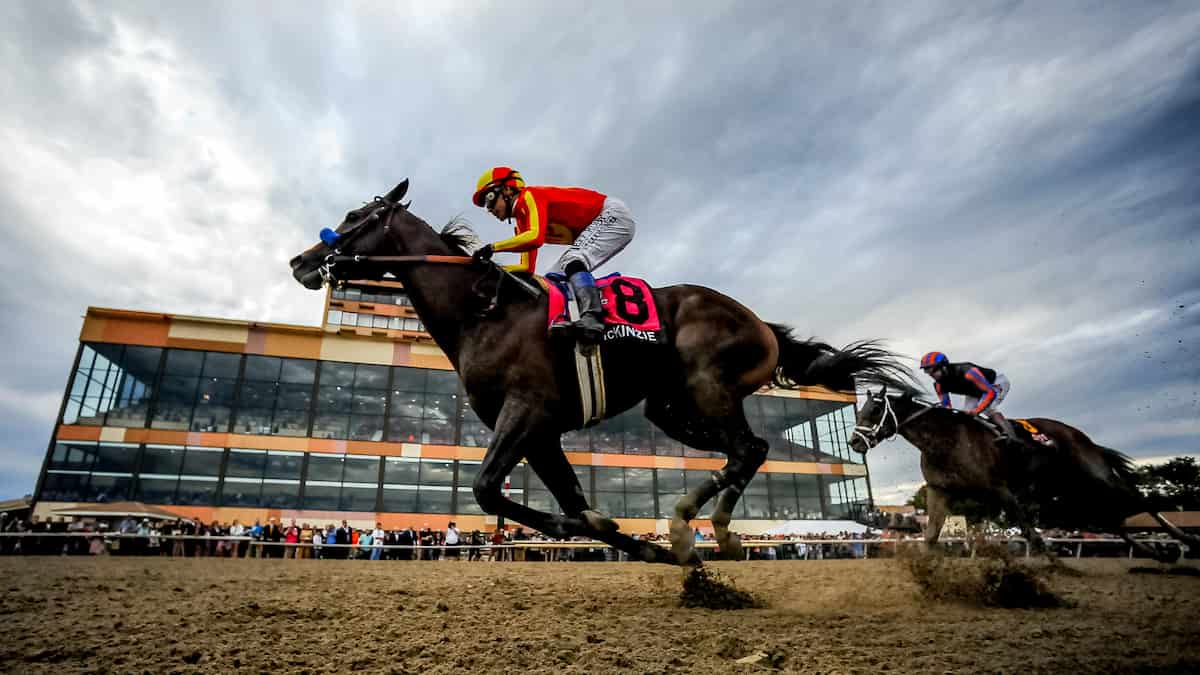