Our Pick: Aleksei Oleinik via decision (+210)

Our Pick: Julija Stoliarenko via decision (-225)

One of the biggest characters in the UFC, Derrick “The Black Beast” Lewis, returns to the main event scene Saturday night and is set to do battle with another top-10 heavyweight: Aleksei Oleinik. Both fighters are riding two-fight winning streaks heading into the bout.

The co-main event will feature a returning Chris Weidman. The former middleweight champion has not fought since losing his light heavyweight debut to Dominick Reyes last October. He is just 1-5 over his last six fights. He takes on Omari Akhmedov.

How to Watch UFC Fight Night: Lewis vs Oleinik

Derrick Lewis followed his loss to Daniel Cormier for the heavyweight title with another loss, this time by TKO, to Junior dos Santos last March. It marked the first time in Lewis’ professional career that he had lost two fights in a row. He has returned to form, however. At UFC 244 last November, Lewis defeated Blagoy Ivanov by split-decision, and earlier this year, at UFC 247, defeated Ilir Latifi by unanimous decision. The latter bout was Latifi’s first fight as a heavyweight.

The “Black Beast” is just that – a beast. Standing at 6 ft. 3 in., Lewis is a heavyweight that needs to cut weight to hit the 265-pound maximum limit. He has a reach of 79 inches and uses it wisely, as he is known for his boxing and knock out power. The Louisiana native trains out of Texas with 4oz fight club under head trainer Bob Perez. He has been fighting in mixed martial arts since 2010. The 35-year-old is ranked as the fourth-best heavyweight in the division.

Like his opponent, Aleksei Oleinik has recently followed back-to-back losses with back-to-back victories. After losing to Alistair Overeem and Walt Harris, Oleinik went on to fight Maurice Greene in January of this year. He defeated Greene by armbar submission in the second round. He followed this performance by defeating a returning Fabricio Werdum (a former UFC heavyweight champion) by split-decision at UFC 249 this past May.

Oleinik will stand just one-inch shorter than Derrick Lewis and will have a two-inch reach advantage over his opponent. Oleinik is known as the “Boa Constrictor” and for good reason. He has a fourth-degree black belt in jujutsu and a black belt in Brazilian jiu-jitsu under Ricardo Liborio. He is the only member of the UFC roster to win a fight by Ezekial choke, and he’s done it twice. The Russian fighter currently trains with the K-Dojo Warrior Tribe as well as with American Top Team. He also has an international master of sport in combat sambo. He is ranked as the tenth-best heavyweight in the UFC.

It’s a shame to say, but the recent story of Chris Weidman has to be considered a devastating fall from grace. After beating one of the greatest of all-time in Anderson Silva to become the middleweight champion and then defending his belt twice, Weidman then lost the championship to Luke Rockhold. Including that loss, Wediman is just 1-5 since late 2015. His last win came in 2017 when he submitted Kelvin Gastelum with an arm-triangle choke. He followed that victory with back-to-back knock out losses to Ronaldo Souza and Dominick Reyes at light heavyweight. Weidman has spent a lot of time in and out of hospitals for surgery as well, including neck surgery. Suffice to say, he is looking for redemption Saturday night as he returns to middleweight.

The 36-year-old American fighter stands at 6 ft. 2 in. and has a reach of 78 inches. He is a former NCAA division I wrestler and currently trains out of Long Island with the Serra-Longo Fight Team. He also trains with the Renzo Gracie Academy. He holds a black belt in Brazilian jiu-jitsu under both Matt Serra and Renzo Gracie. He has been fighting professionally since 2009. Currently, Weidman is not ranked within the middleweight or light heavyweight divisions.

Unlike Chris Weidman, Omari Akhmedov has gone undefeated since late 2016, with the only hiccup on his record during that time being a draw with Marvin Vettori. Akhmedov fought three times in 2019, winning all of those fights via unanimous decision over opponents Tim Boetsch, Zak Cummings, and most recently Ian Heinisch last December at UFC 245. He has been a member of the UFC roster since 2013.

Born in Dagestan, the 32-year-old Akhmedov comes into this bout two inches shorter than his opponent. More worrisome for the Russian is that he will have a five-inch reach disadvantage as well. However, Akhmedov makes up for those physical disadvantages. Now training with American Top Team, he holds an international master of sports in both combat sambo and hand-to-hand combat as well as a second-dan black belt in hand-to-hand combat. Fighting since 2010, Akhmedov sits just outside of the middleweight top-10 as number eleven.

Darren Stewart has not had the UFC career that he may have dreamed about. His debut was marred as a no-contest and he followed that by losing three straight. But a split-decision loss to rising star Edmen Shahbazyan in 2018 opened some eyes. He followed that loss by winning two in a row, including a unanimous decision win over Bevon Lewis at UFC 238. His most recent fight took place at Cage Warriors 113 earlier this year. Unfortunately, his winning streak was snapped by a unanimous decision loss to Bartosz Fabinski.

Born in England, Stewart has been fighting professionally since 2013. He stands at even 6 feet and has a reach of 74 inches. He currently trains at the MMA Clinic and holds a black belt in taekwondo as well as a purple belt in Brazilian jiu-jitsu under Michael Russell. He is currently unranked by the UFC.

Saturday night will mark just Maki Pitolo’s third fight in the UFC octagon, wherein he has gone 1-1. He made his promotional debut at UFC 243 last year in a losing effort to Callan Potter. He rebounded in his second effort earlier this year, defeating Charles Byrd via TKO in the second round of their fight.

The 29-year-old Hawaiian stands at 5 ft. 10 in. tall and has a reach of 73.5 inches – both statistics have him carrying very small disadvantages. He currently trains with West Oahu MMA and has competed on the Dana White Contender Series as well as for Bellator. He is currently unranked by the promotion.

A former Invicta FC bantamweight champion, Yana Kunitskaya was called in to make her UFC debut against the dominant Cris Cyborg for the UFC title. Needless to say, things didn’t go Kunitskaya’s way that night in March 2018, losing via TKO at UFC 222. She did follow that loss with back-to-back wins (both by unanimous decision) over Lina Lansberg and Marion Reneau. Her latest bout came back in December of 2019 when she took on hot prospect Aspen Ladd. Kunitskaya would succumb to Ladd in the third round, losing by TKO.

Standing at 5 ft. 8 in. and having a reach of 68.5 inches, the 30-year-old Russian trains out of the United States with the Jackson Wink MMA Academy alongside her fiance, former light heavyweight title challenger, Thiago Santos. She is mostly known as a striker, with high level skills in taekwondo, muay thai, and gaidojutsu. She is ranked as the eighth-best bantamweight in the UFC heading into this weekend.

Julija Stolianrenko has had one appearance in the UFC and it was back in 2018 at the Ultimate Fighter 28 finale. She defeated Natalya Dyachkova via first-round armbar submission. Since then, she has won four more straight fights – three of which were also armbar victories. Her last fight came earlier this year for Invicta FC in which she defeated Lisa Verzosa for the vacant Invicta FC women’s bantamweight title. She returns to the UFC in similar fashion as her opponent entered the promotion years ago.

A Lithuanian-born fighter, Stoliarenko stands equal to her opponent at 5 ft. 8 in. and will half just a one-half inch reach advantage. She is 3-0 as a kickboxer and holds a brown belt in Brazilian jiu-jitsu. Training with Fighter House gym, she is riding a five-fight winning streak heading into her fight Saturday night.

Beneil Dariush is one of the most decorated grapplers on the UFC roster and he showcases that fact often. Currently riding a four-fight winning streak, two of those wins came via submission – one by rear-naked choke and one by arm-triangle. Most recently, Dariush took to the octagon to do battle with Drakkar Klose earlier this year at UFC 248. In the second round, Dariush landed a bomb that knocked Klose out cold. Dariush was awarded his third performance of the night bonus in a row following the victory.

Born in Iran, Beneil Dariush now lives and trains in America. Standing at 5 ft. 10 in. tall, he has a reach of 72 inches. Fighting since 2009, Dariush currently trains out of California with Kings MMA and coach Rafael Cordeiro. He holds a black belt in Brazilian jiu-jitsu under Romulo Barral and Bruno Paulista as well as a black belt in muay thai. He is also a three-time world no-gi jiu-jitsu champion. He enters this fight ranked as the 14th-best lightweight in the division.

It may not be four in a row like his opponent, but Scott Holtzman is riding a winning streak of his own heading into Saturday night. In the summer of 2019, Holtzman defeated Dong Hyun Ma via TKO (doctor’s stoppage) at the end of the second round. He followed that performance up with a beautiful showing against Jim Miller earlier this year, in which he won via unanimous decision. The fight with Miller was deemed as the Fight of the Night.

Standing at 5 ft. 9 in., the American fighter will stand one-inch shorter than Dariush and will also be at a two-inch reach disadvantage. Fighting out of Knoxville, Holtzman trains with Shield Systems and the MMA Lab. He has been fighting since 2012 and holds a brown belt in Brazilian jiu-jitsu under Ben Harrison. The 36-year-old fighter is currently unranked heading into this contest. 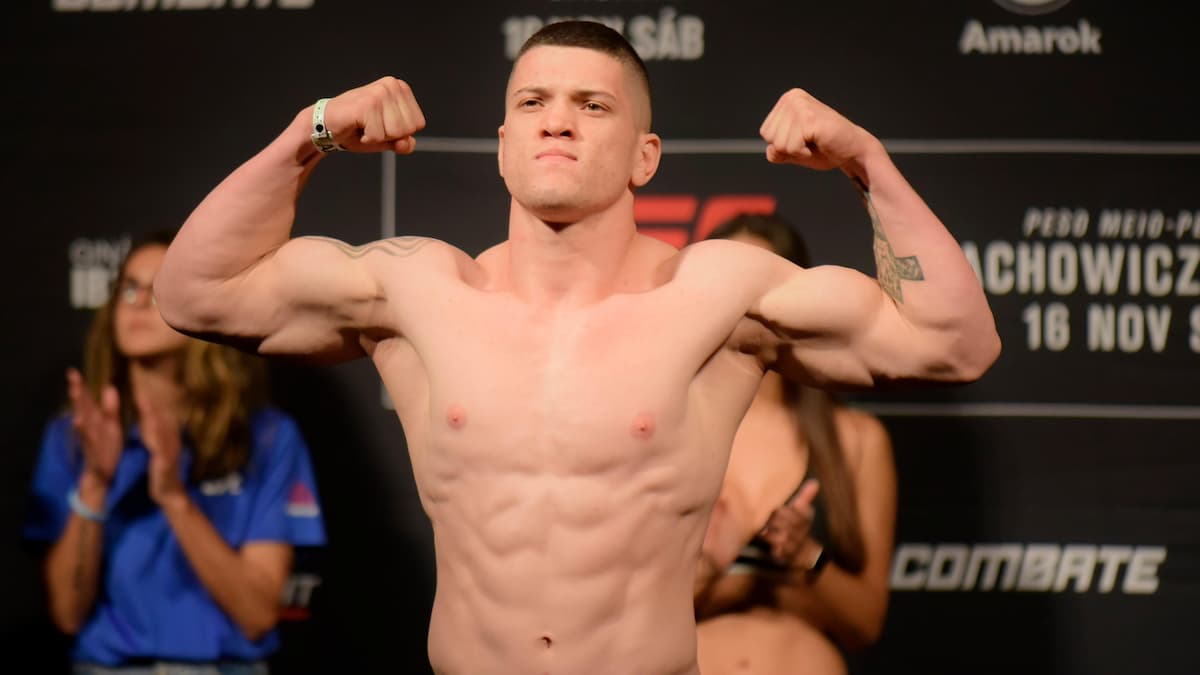 UFC 270 Ngannou vs Gane Prelims Undercard Odds, Predictions, Picks
We break down the UFC 270 Prelims . Find the latest odds, predictions, and our free picks for each fight on the undercard.
UFC