These days the Los Angeles Chargers have a powerful roster and even though they haven’t won their division since 2009, the Bolts have a legitimate chance at making a deep run this year.

All that adds up to a lot of excitement for fans of the team and sports gamblers looking for profitable betting opportunities.

In this guide, we’ll cover lots of important aspects of the LA Chargers to help you learn more about the team and how to successfully bet on them, including:

The Los Angeles Chargers organization played its first game in 1960 as a member of the American Football League and from 1961 to 2015 played in San Diego as the Chargers. The team did win one league championship before the AFL and NFL merged in 1970 but have not won any Super Bowls in the modern NFL era.

To their credit, they have won one conference championship, 15 division titles and made 19 playoff appearances. Their most successful season came in 1994, when they made it all the way to the Super Bowl, losing to the San Francisco 49ers.

The Chargers also dominated the AFC West from 2004 to 2009, winning the division five out of those six years.

After the 2015 season, the organization moved from San Diego to Los Angeles. 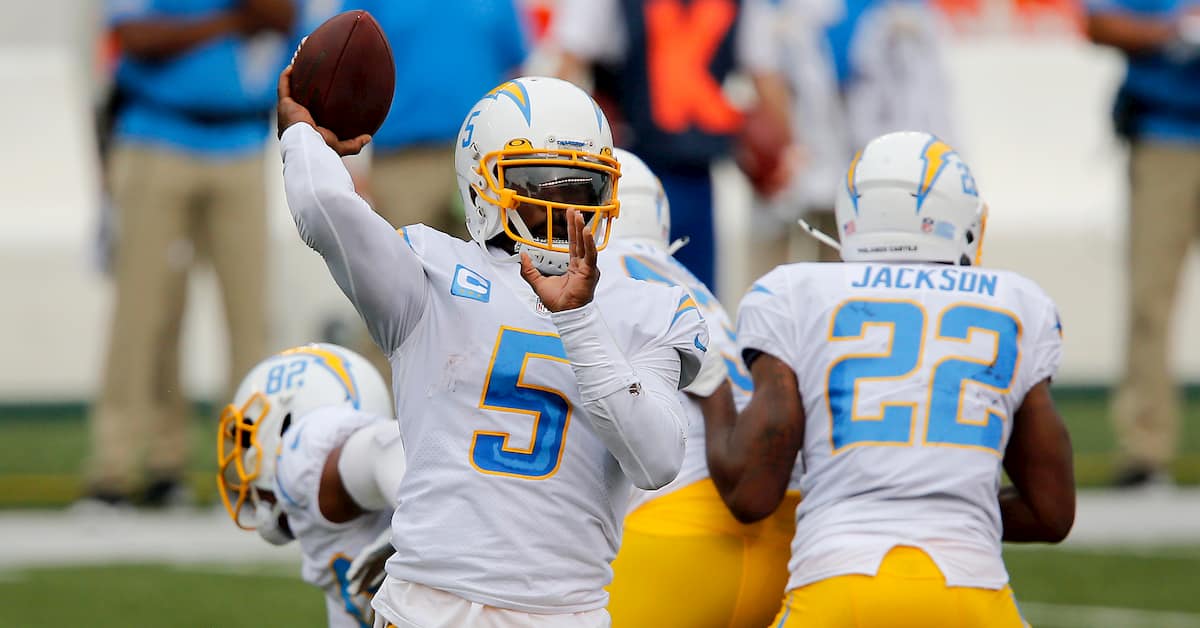 How much are the Los Angeles Chargers worth?

During the 2017 season, the Chargers organization generated $346 million in revenue and Forbes estimates the business to be worth $2.3 billion.

Who owns the Los Angeles Chargers?

The Chargers are owned by the Spanos family.

When did the Los Angeles Chargers become a team?

Have the Los Angeles Chargers Won a Super Bowl?

No, the Chargers have not won a Super Bowl.

What stadium and city do the Los Angeles Chargers play in?

Since 2017, the Chargers have played at the Dignity Health Sports Park, located in Carson, California.

Where do the Chargers have training camp?

What is the Los Angeles Chargers mascot?

The Chargers currently do not have an official team mascot.

What are the Los Angeles Chargers team colors?

With one of the most talented rosters in the entire NFL, the Chargers are among a handful of legitimate threats to win the Super Bowl. This makes the Chargers a great choice if you’re thinking of making a futures bet on the NFL this season.

The Los Angeles Chargers had a successful 2018. They finished 12-4, posted impressive wins at Seattle and at Kansas City, got an MVP-caliber year from QB Philip Rivers, and won a road playoff game at Baltimore.

On the flip side, they weren’t able to win the division, lost yet another playoff game vs. the Patriots, and may have missed their best shot to win a Super Bowl with their 37-year-old franchise QB. Despite the disappointing end to the season, Los Angeles proved they belong among the league’s elite, finishing with both a top-ten offense and defense.

The Chargers came into 2019 with one of the most talented rosters in the AFC. WR Keenan Allen, RB Melvin Gordon, DEs Joey Bosa, and Melvin Ingram, and Philip Rivers is all ready and healthy heading into training camp.

The biggest roadblock for the Bolts comes from within the division, where league MVP Patrick Mahomes and the Kansas City Chiefs look primed to own the AFC West for the next decade. With the 28th overall pick in the draft, the Chargers bolstered their defensive line with the selection of DT Jerry Tillery out of Notre Dame.

When it came to hitting overs last season, The Chargers were up and down depending on which part of the season you look at.

The Bolts started out by hitting the over in five of their first six games. From that point on, the Chargers only hit the over in four of their final 12 games (including playoffs). Their offense, which was consistently among the league’s best, scored more than 25 points in 11 games last season, with a high of 45 points in week 12 vs. the Cardinals.

Take a look at these betting stats and trends from last year if you plan to bet on the NFL and the Chargers this season:

While several states are turning the page on a new era of legalized sports gambling in America, it seems that California is still stuck in wait-and-see mode. For now, Chargers fans will have to either wait or make the trip to a state where sports betting is legal like Nevada.

California has existing tribal-state casino agreements that prevent any major changes being made without tribal consent. An additional hurdle is that legal sports betting may require an amendment to the California constitution which takes time and widespread support.

For more information on the situation, refer to our guide to legal sports betting in California.